On Santa Cruz Island is the largest city of Puerto Ayora with 15,000 inhabitants, where also the Darwin Institute is located. The city is the administrative hub of the islands, and is also the primary logistics center for most of the tourism that takes place in the Galapagos. Both day trips to the more nearby uninhabited islands, exciting excursions by land and water at Santa Cruz, as well as cruises often depart from here. There is an excellent paved country road from north to south, which connects the airport at Baltra with Puerto Ayora in the south. There is a reasonably developed agriculture in the lush northern highlands in the zones that are not national park.

Puerto Ayora
The city is divided into two – the tourists’ waterfront and the streets behind and the whole local part that comes in the other blocks further inland. Restaurant and accommodation prices decrease proportionally the more blocks you travel in the city from the waterfront. A cozy, simple and cheap meal from the grill on an inverted beer crate is an option in the more local part, and somewhat more reminiscent of the continent the islands are in, than the very fashionable waterfront. It can be a fun contrast for many to experience the difference. Despite the perpetual urban development, however, it is still possible to see sea lions, sea iguanas and lots of bird life around the harbor. In the water you can be lucky to see sea turtles, rays and sharks, and there is excellent snorkeling a quarter of an hour walk from the center (The pier and the supermarket, El Malecon). There is a small fish market with rapid trade in the morning and morning hours, where a swarm of pelicans hopeful is ready to take away the sad remnants of those trades. Here are cafes with wifi, internet cafes, bars, restaurants and hotels in all price ranges, lots of souvenir shops and jewelry stores. The city is an excellent and a natural stop on an island hopping, as there are a wealth of exciting excursion destinations both on land and at sea. There are also a number of 1-day cruises to uninhabited islands, such as Plazas, Bartoleme and Seymour. The city is also included on the many multi-day cruises, either as a starting or ending point, or in the middle of a longer sailing schedule, as passengers must be collected / delivered and stocked up.

Darwin Institute
This is definitely worth a visit as it is the islands’ scientific and conservation command center where biologists, scientists and volunteers from all over the world work at high pressure. We are introduced to everything from Charles Darwin’s theories to the great ongoing conservation work that is taking place on the islands. The extensive Visitor Center especially offers exciting land turtle rehabilitation projects where there are endemic species from specific islands. Galapagos turtles can grow up to 200 years old (some scientists even reckon they can grow even older). Unfortunately, the star above them all, Lonesome George, passed away in 2012. He was from the island of Pinta, and was known as one of this world’s rarest species. As a curiosity, he can now be seen in a stuffed state at the institute, after the specialists at the New York Museum of Natural History,

The turtle projects in the northern highlands
Great opportunity to experience these magnificent and unique animals in more natural surroundings than at the Darwin Institute. There is always at least 1 in 2 rehabilitation projects open to tourists, and you get the opportunity to get reasonably close to the turtles, but not as close as, for example, Prison Island on Zanzibar, where there are no rules for the animals. It is a fantastic experience and an opportunity to follow an incredibly important conservation project of these rare species, and should not be confused with a raw nature experience in the animals’ natural and undisturbed habitat. The trip to the turtles in the highlands goes through the cultivated part of the Galapagos, with fairly dense populations and their livestock. Many fruits, meat, milk, etc. today come from the islands themselves and are not imported.

The twins / Los gemelos
These are 2 huge depressions in the highlands along the road to Baltra, probably formed by gas leaking from a depot below, so that the area above has collapsed. It is very beautiful nature in the green lush highlands, and interesting bird life, where you bla. Can experience the red flycatcher, the short-eared owl and the Galapagos hawk. There is a hiking opportunity of 1.5 km. path system around the craters.

Bachas Beach
This beautiful natural beach, which with its fine white coral sand forms a nice nesting place for sea turtles, is often our first encounter with the islands’ magnificent natural and exceptional wildlife when embarking on a multi-day cruise directly from the airport at Baltra. There is wet landing from the rubber boats directly on the beach, and then the adventure is shot well and thoroughly. In the lagoon behind the beach there is often a good opportunity to see flamingos and other coastal and wading birds. However, bird life and specific species are seasonal. There are a multitude of pelicans, and you can often be lucky to spot reef sharks very close to land, just as you often come across the sea iguana and the blue-footed sole, both of which must be categorized as “must see” on the islands.

Black Turtle Cove
An absolute highlight of a multi-day cruise. This naturally protected bay, which is closed to visitors from the land side, is already a scenic chapter in itself. Beautifully framed by vast mangrove forest in shades of red, white and black, this adventurous lagoon reveals itself with crystal clear water. Already from the rubber boats, spotted eagle rays, white-tipped reef sharks and sea turtles are spotted, and snorkeling is a chapter in itself. The word world class could come into play in relation to the close experience with these larger sea creatures.

Cerro Dragon
Exciting national park area named after the land iguanas, which can also only be experienced from a multi-day cruise. Once again, fantastic experiences await with dramatic landscapes and distinctive wildlife, such as the very distinctive land iguanas that can only be experienced in quite a few places in the archipelago. The current presence of iguanas can only be attributed to a fantastic piece of conservation work, as virtually all iguanas had been exterminated by ownerless dogs in the area in the late eighties. In 1990, it was decided to remove the dogs, and since then the population has grown. From the beach, follow the 2 km trail system that brings us to the iguanas, via a beautiful saltwater lagoon that forms the seasonal habitat for flocks of flamingos and other waders. We also encounter the endemic Candelabra and Oppuntia cactus along the way on our hike 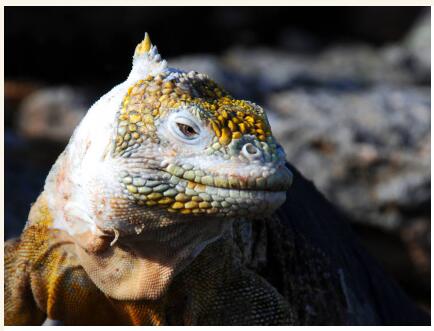