Exciting and closest possible uninhabited island on a day cruise from Puerto Ayora. Plazas are important on eg island hopping trip, primarily due to the land iguanas. The landscape is beautiful with its reddish low vegetation, broken by the large Opuntia cacti. Here is a large sea lion colony that calls us already at the landing site, and the dramatic southeastern rock wall is a nesting place / habitat for all sorts of exciting seabirds with Nazca sole, blue-footed sole, swallowtail gull, and large colony of tropical scraps (shearwater in English), which drones past. There is a fantastic dramatic view to the south, keep an eye out for shoals of large yellow mullets in the surface, and possibly. passing “torpedoes” (tuna and the like), sharks, turtles.

One of the smaller islands located on the southeast side of Santa Cruz. Again one of the denser uninhabited islands, which can also be made on day cruises from Puerto Ayora. Wet landing from the rubber boats on the beautiful beach with chalk-white coral sand, and the noisy sea lion colony form the welcome committee. From here along the marked path into the country and down to the beach on the other side, where there are again many sea lions. One may be lucky to see (harmless) snakes and Galapagos gulls on the hike. Typically, snorkeling from the yacht or inflatable boats is arranged along the cliffs with sea lions and myriads of fish and often eagle rays. If you enter in the middle of the bay, there is a great chance of encountering turtles and reef sharks.

San Cristobal
This is a larger island, furthest to the east, and thus also (according to geology) the oldest (about 4 million years).
Here is Baquerizo Moreno, the capital and the second most important port city, which is also the hub for many multi-day cruises. However, everything is on a pleasantly small scale and with a very charming waterfront and promenade, where all viewing benches are usually occupied on a 24-hour basis by the local… ..sea lions, who hold a long siesta with the most beautiful views. There are just over 5,000 inhabitants, and there is also an airport with connections to Quito and Guayaquil, but there are not always daily departures to Quito. It can be a great solution to fly out to either Baltra or San Cristobal and home from the other island, whether you are expanding your cruise with nights ashore, or are on an exciting island trip. There is an interesting museum / knowledge center within walking distance of the city with excellent posters that tell about the place’s spectacular geology, biology, history, etc. You can snorkel from land,Leon Dormido and Islas Lobos, hiking in the highlands and visits to exciting land turtle project that is somewhat less visited than the pendants on Santa Cruz.

Leon Dormido – Kicker Rock and Islas Lobos
This majestic towering “sleeping sea lion” rock is located a few miles off the coast of San Cristobal, and it is not difficult to guess why it got this name. The cliff is divided in two, and allows for one of the most adrenaline-pumping and fantastic underwater adventures on the islands, namely snorkeling downstream through this natural underwater gorge. It requires really good nerves and swimming / snoring skills, as the boat sails around on the other side and picks up when you are slightly shaken through something. Close contact with eagle rays of half garage door size, many reef sharks, occasionally Galapagos shark (this looks like a real shark, as opposed to the small reef sharks) and hammerhead sharks, as well as sea turtles, just to name the larger species. Eden yacht is licensed for this snorkeling trip as one of the very few yachts that sail the longer cruises. The sister boat Aida Maria does not have, but instead has Lobos Island, which is much easier snorkeling and often the opportunity to snorkel with sea lion females and their young. With extra nights at San Cristobal, a combined snorkeling trip to both of these locations can be purchased. Galapagosh whales are often spotted on their way to the cozy port city of Puerto Baquerizo. Along the coast on the last nautical mile you have large colonies of especially frigatebirds and blue-footed gannets in the binoculars, which lie in nests on the rock walls.

This small island is located just north of Baltra and the airport and thus also close to Santa Cruz Island. It has a rich bird life, and especially frigatebirds breed here, and it is the best place in the Galapagos to see male frigatebirds with inflated larynx trying to attract females. In addition, it is an excellent place to see beautiful land iguanas, lots of sea lions, blue-footed gannets and sea iguanas. In the water you can snorkel (if it has not been banned), but it is also a place with current, and then there is a good opportunity to see sharks from the ship. This is a “dry landing”, which can be problematic with swells, etc. In the photo you can see how such a landing takes place in calm weather. 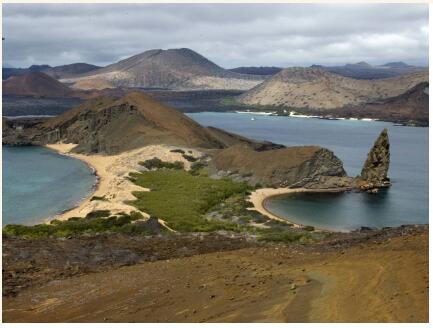