Lobo means wolf, which refers to the many sea lions that are here (lobos marinos = sea wolves). In addition, a lot of bird life to watch and a little mangroves. It’s a great place to get some great photos of sea lion cubs. In addition, you can snorkel behind the small island, towards the mainland. Here one can be lucky to see many turtles.

Punta Suarez is considered to be the most all-round representative location in relation to the islands’ distinctive wildlife. Rocks, sandy and pebble beaches form the habitat of the legendary Albatross, which nests in the period from April to December, land and sea iguanas, the endemic Hood mockingbird, Galapagos hawk, Galapagos pigeon, Blue-footed sole, Nazcasule, sea lion colonies and sea turtles. Dry landing in the rubber boats on the rocks by the lighthouse, where we may already be called by sea lions sunbathing on the rocks. On the cliffs, we usually also manage to greet the first scattered smaller colonies of sea iguanas and busy ghost crabs. Exciting longer and a little more physically demanding hike, primarily along the spectacular low and higher rocky coast of “nature trail” with sometimes very uneven ground of larger volcanic rock pieces (here you must not be difficult to walk). Here is rich with the aforementioned classic Galapagos animals on land and at sea and in the air.

On the east side of the island is Gardner Bay, where we with the rubber boats call at the beautiful chalk-white sandy beach, where crowds of sea turtles lay their eggs at night, and are home to a larger sea lion colony, which you can get very close to, as they have a reputation for be the visitors very kindly voted just on this beach. It is often possible to meet the sea lions in the water from the beach on a swim or snorkel trip. The underwater experience is amazing, both on one side and the other side of Turtle Rock, which is a good swim (with fins) off the beach. The farthest part requires 10 minutes for a good swimmer, and here the water is deepest and also most turbulent. On the deeper water there is a good opportunity to snorkel with reef sharks, devil rays (manta) and sometimes you are lucky to experience sea turtles up close.

This is one of the best places on the Galapagos to see bird life and beautiful scenery. Dry landing in Punta Suarez, with absolutely amazing bird life and many very beautiful sea iguanas. This is where the most colorful sea iguanas are found… and the largest – probably because you are closest to the cold nutrient-rich ocean currents that bring plenty of food (algae). And that is probably also why bird and animal life is rich here.

You see lots of gannets, tropical birds and of course Waved Albatross (the world’s only breeding place and it can only be seen in the period June-December)

Gardner Bay
One of the most beautiful beaches in the Galapagos and with good opportunities for sunbathing, snorkeling for example from the rubber boats at Isla Tortuga (Turtle island) or simply enjoy the many sea lions that fling on the beach or at the water’s edge.

This island is typically programmatically related to Española and belongs to the southern islands. Floreana is inhabited as one of the few Galapagos Islands.

Post Office Bay , has a historical significance, as whalers in the 18th century established a barrel for mail, where the idea was that the letters should be brought to their destination by other sailors. Today, the barrel is used primarily by aspiring tourists, primarily as a fun historical gimmick. Incidentally, the bay was also the landing site for some of the first settlers on the island, who primarily settled here, as there was a lot of lush and more food than on many of the other islands in the group.

By Punta Cormorant, there is wet landing and warm welcome from the island’s charming and often noisy welcome committee, the resident sea lion colony. Depending on the alpha male’s mood and the number of tiny pups, one can often get pretty close to these magnificent animals and get the most amazing close-up pictures (under the expert guidance of the guide so we do not get too close). From here easy hike on marked trail towards the lagoon, beautifully sandwiched inside between volcanic craters. The lagoon is the habitat and breeding ground for the archipelago’s largest concentration of flamingos and also for many of the islands’ other distinctive waders. One is surprised by the richer plant life, which is a great contrast to the other relatively barren islands. Back on the beach, ghost crabs dart around and the certainty of the many sea turtles that lay their eggs in the fine white coral sand at night bodes well for the snorkeling adventure at Devil’s Crown . Snorkeling here is approaching world class, as we very often encounter shoals of eagle rays (both spotted and golden), sea lions (often with cubs), moray eels, of course sea turtles and occasionally hammerhead sharks. This is in addition to the beautiful corals and “ordinary” colorful fish life, which includes fish, scorpionfish and Galapagos groupers (Bacalao), which are on the IUCN Red List of Endangered Species, just to name a few. 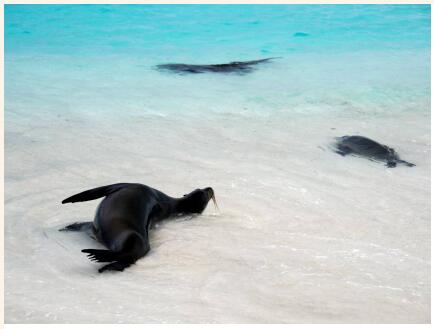