During the Eighties, the training of those writers initially grouped under the term ” post-war generation ” was completed; writers thus identified according to a biographical criterion that highlights the experiences of the resistance and above all of the civil war (1946-49). The traumas caused by the latter and the consequent contrasts between a culture inspired by Soviet Marxism and a culture that relied on pro-American nationalism guide thematic choices on a creative level, while on a critical level they hinder the application of unitary and persuasive criteria.

The writers of the 1950s struggled to gain their own space in publishing and printing, firmly controlled by the writers of the 1930s, and encountered considerable difficulty in winning recognition; but they themselves were unconvincing in giving a critical interpretation of their aspirations. Inaccurate labels such as ” poetry of the resistance ”, or ” of post-surrealism ”, with relative pigeonholing, which accompanied the activity of these writers for a couple of decades, could not promote any clarification regarding their programs. and their works.

Poetry.- Without underestimating intermediate positions, by age and by assumptions, of poets such as Greece Thémelis (1900-1976), Greece Gheralís (b.1917), A. Diktéos (1919-1980), T. Varvitsiotis (b.1916), K. Athanassùlis (1916-1979), A. Dekavales (b.1920), the tendencies that most clearly differ from past experiences are those of M. Sachturis, T. Sinòpulos, D. Papadhitsas, M. Anagnostakis, N. Karusos, T. Patrikios. Nonetheless, it is necessary to specify that even these younger poets, compared to those mentioned above, have not had the opportunity to implement sensational innovations, not because of their intrinsic inability, but because the previous generation, to which they are inevitably opposed, had made its own, living them in first person, the great changes of the century: the use of free verse, the weakening of logical connections, free association in image formation, surrealistic practices. The most persuasive results were obtained by poets who channeled their emotionality into the monological discourse, favoring dramatic movements and reducing the use of figures.

Sinòpulos (1917-1981) already in Μεταίχμιο (“Between two fronts”, 1951) shows to put aside the lyrical genre and to focus on the dramatic; M. Sachturis (b. 1919) reassembles familiar objects in such a way as to bring out their monstrosity; D. Papadhitsas (1922-1987) reaches abstract insights through everyday experiences; M. Anagnostakis (b. 1925) takes on a provocatively prosaic tone to challenge ” well-being ” and the politics of compromises; T. Patrikios (b. 1928), a militant poet in communism, followed a more varied research, without losing sight of the intentions of art. A case in itself constitutes N. Karusos (1926-1990) for the reference to the Christian faith.

Storytelling.- Equally numerous are the narrators of marked individuality. Some of them were initially inspired by the theme of the civil war. It is noteworthy that these writers, rather than pouring their burning experiences into a book of testimony, built novels based on a narrative character that allowed games of a more complex and captivating psychological perspective. In this sense, A. Kotziàs (b. 1926), N. Kàsdaglis (b. 1927), A. Franghiàs (b. 1921) are cited. Evidence of advanced technical writing has also been provided by less assiduous novelists, such as K. Tachtsìs (1927-1988), author of Τὸ τϱίτο στεϕάνι (“The third wedding”, 1962) or like A. Alexandru (1922-1978), author of the political fictional novel Τὸ ϰιβώτιο (“La cassa”, 1975). L’ insistence on civil issues rewarded R. Rufos (1924-1972), who gave his best in the historical novel Γϱαιϰύλοι (“Greculi”, 1967). On the international level, the best known narrator still remains V. Vassilikòs (b.1933), some works of which have also been translated into Italian (see App. IV, iii, p. 797). Also worth mentioning are: M. Kumantarèas (b.1933), Greece Ioannu (1927-1984), Th. Valtinòs (b.1932), D. Chatzìs (1913-1981), narrators who in various ways have delivered novels and tales of classic precision.

Numerous new writers appeared in the 1970s. In common with the precedents they have the bitter experience of the military dictatorship (1967-74). The impossibility of taking an active part in the youth movements of 1968 does not prevent them from assuming attitudes of protest. Poets reject paternalism, institutions, denounce consumerism. However, the improved conditions of life assure young people a more accurate culture, a more secure mastery of the means of expression. Some authors correspond to as many distinct cases in the research of poetry: L. Pùlios (b.1944), V. Steriadis (b.1947), Greece Kontòs (b.1943), M. Pratikakis (b.1943), D Kalokiris (b. 1948), who supports his peers also through magazines and series, S. Bekatoros (b. 1946), T. Mastoraki (b. 1949), A. Fostieris (b. 1953).

The narrative proposes a broader theme, with a preference for the monological discourse of an invented character, as in the works of F. Drakondaidìs and Greece Ghiatromanolakis (born 1940) as well as the resourceful writer M. Duka (b. 1947). There is no shortage of narrators who trust in autobiographical evocation in a simple and vibrant style, such as T. Kazantzìs, S. Papadimitrìu and D. Nolas. 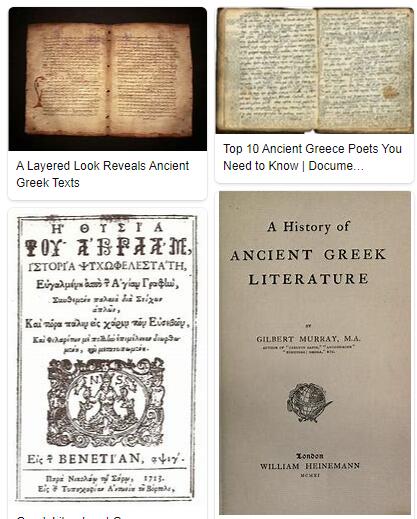